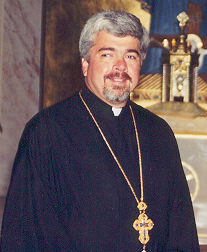 Father Louis J. Noplos was born on May 3, 1956 and was raised in Chicago, Illinois and attended grade school and high school in Chicago. Upon his graduation from John Fitzgerald Kennedy High School in 1974, Fr. Lou attended the University of Illinois, Chicago Circle Campus for one and one half years and majored in Geology. In 1975 he entered Hellenic College in Brookline Massachusetts, where he received his Bachelor of Arts in 1979. In July of the same year he and Maryalice Volin were wed at the Assumption Church on the southwest side of Chicago. Fr. Lou entered Holy Cross School of Theology in the fall of 1979 while he and Alice lived in Roslindale, Massachusetts. In March of 1982 Fr. Lou was ordained to the Holy Deaconate and graduated Holy Cross School of Theology in May of 1982 receiving his Master of Divinity.

Fr. Lou was assigned to Saint Demetrios Greek Orthodox Church in Cub Hill, Maryland on September 16, 1996. In addition to his responsibilities as Pastor of Saint Demetrios, Fr. Lou serves on the Diocesan Council as Secretary, Chaplain to the Baltimore City Police Department, a member of the Central Maryland Ecumenical Council, Chaplain to the Chesapeake Youth Council Summer Camp Program, Chairperson to the New Jersey Clergy Retreat, and a host of many other committees and responsibilities.